NOTTON VILLAGE TRUST FACILITIES
ANNOUNCEMENT - 23rd September 2021
​
Notton Bonfire - November 2021 - Cancelled
​
We had hoped that after the cancellation of last year's event due to COVID we would have been able to put on an event to celebrate our 20th year. However, after a great deal of thought and discussion amongst our team of volunteers we have regrettably decided to cancel this year's event for 2021.

This is not a decision we have made lightly and we are extremely disappointed that we are unable to give everyone an event which would have helped to put the challenges of the last two years behind us. Indeed it has been as a result of those challenges that we have been forced to cancel the event.

This year in trying to start our planning we realised immediately that we would not have the number of volunteers needed to run the event safely. This was further exacerbated by a huge reduction in our parking capacity which had already posed a significant risk to public safety in previous years. Finally we knew that although most of the general restrictions around the pandemic have now been lifted, there were still a number of controls & processes we would have had to make to keep the event COVID safe. These would have further complicated an already challenging process beyond the capacity of our volunteer team.

We would like to extend our heartfelt apologies to each and every one of you who have attended Notton Bonfire & Fireworks Display in the past that there will not be an event this year. Since it’s launch in 2001 we have raised over a quarter of a million pounds for local charities & services providing help to the local community alongside fun and entertainment to over five thousand of you who have attended each year.

​We dearly hope that this is not the end and with that in mind we will still revisit a decision on hosting an event next year should the circumstances change and the situation improve. Thank you to everyone who has attended and supported us over the years and we greatly appreciate your understanding of the tough decision we have made​.
ANNOUNCEMENT - 10th September 2021
PRESS RELEASE - 10th September 2021

Residents from the Village of Notton in West Yorkshire and surrounding areas are set to get an improved facility during the coming months, as the Sports playing fields regeneration programme commences, thanks to grants of £70,000 from FCC Communities Foundation, £50,000 from Sport England and funding of £78,500 from The Lottery.

The money will be used to support a sizeable regeneration programme which involves draining and reconstruction of the Sports and Social Field.

The fields suffer with a high water table in the ground and as a result get regular ponding of water which is obviously a great problem for the Village’s regular sporting events which include Football, Cricket and Archery. Many other social events, such as the Village’s Annual Gala, Firework Displays and others have also encountered these problems, suffering many muddy messes and cancelled events.
This has been a long project in the making but will be worth it, making a significant difference to the village and surrounding Community.
Alan Shand, Chairman of the Notton Village Hall Management Committee says
“This project will provide a real boost to the people of Notton.  Our Notton Village Hall has a thriving community spirit and we want to keep that going.  Further though, after this work is carried out we will be able to encourage many more people to use the facility.
It’s fantastic that FCC Communities Foundation has awarded us this money and we’re really looking forward to our Sports & Social Fields regeneration taking shape over the next 12-18 months.”

For further press information about this project, contact Darrel Cartwright at darrelvcartwright@gmail.com or visit www.nottonvillagehall.uk

ANNOUNCEMENT - 30th December 2019
​
​Alan Shand and Peter Taylor shown here, receiving an award for £2503 towards the Sports and Social Pavilion which was spent on the kitchen.  Thanks go to June Ivory who applied for the grant, but she was unable to attend because of work so Alan and Peter went on her behalf. 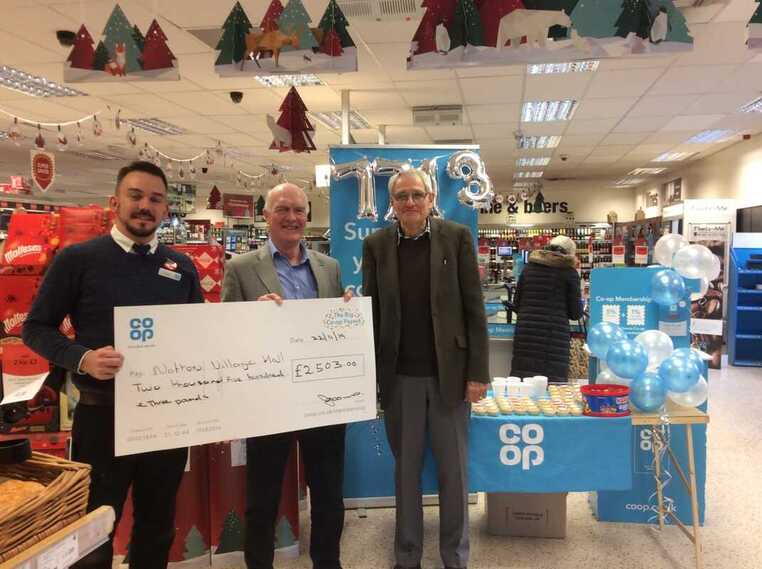 Join us for an informal opening of our new facility.  ​Light refreshments.  ​All welcome

For those not able to join us during the day the Pavilion will  be open from
7:00 to 8:00  pm on Wednesday evening too.  Again, light refreshments will be served 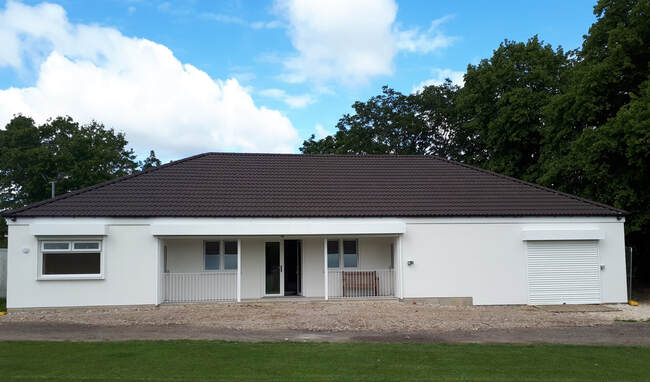 ANNOUNCEMENT - 10th January 2019
​
DEVELOPMENTS WITH OUR NEW SPORTS AND SOCIAL PAVILION
We are hoping to start the construction of the new Sports and Social Pavilion on week commencing the 21st of January.  The work is expected to take about 12 weeks to complete, weather permitting.
ANNOUNCEMENT - 25th November 2018
​
​Notton's Bonfire and Fireworks Display
Sunday 4th November 2018
​
A huge thank you to everyone ​who joined us at this event.

​It was well attended and enjoyed by many.  We know this causes temporary traffic congestion in the village, but the funds raised to support the Village Hall and the Charities we are able to assist as a result are considered by most to be a worthwhile sacrifice.

The accounts have now been finalised and we're pleased to share the details of the charities we've been able to  support as a result of the funds raised from our Bonfire event.

The  remainder of the funds go towards the upkeep of Notton Village  Hall which is totally independent of District and Parish councils and other than a small grant for the children's play park, receives no financial aid from them.

This means that the upkeep of the Hall is therefore entirely reliant on income generated either from fundraising events or from hiring out the hall externally to individuals or groups.

Early on Sunday morning - Construction of the bonfire takes men and machinery working in tandem.
​Our army of volunteers is  supported by bacon, sausage and eggs supplied from the Village Hall!
ANNOUNCEMENT - 7th November 2018

DEVELOPMENTS WITH OUR NEW SPORTS AND SOCIAL PAVILION
On 10th November we are due to start demolition of the existing Pavilion
​in order to make way for the new one.
​
ANNOUNCEMENT - 5th October 2018
​
FUNDING SECURED FOR OUR NEW SPORTS AND SOCIAL PAVILION
The Chairman of the Notton Village Hall Trust has recently received some fabulous news which impacts on our plans to build a new Sports and Social Pavilion. The Garfield Weston Foundation, to whom we applied for a grant, has just written to share the exciting news that we’ve been granted £80,000!

Alan Shand applied to the Garfield Weston 60th Anniversary Fund for a grant.  The Foundation says they received an unprecedented 2,300 requests for funding totalling £200 million, so we have been extremely fortunate to be selected.

This great news means we can accelerate the pace of our plans because some much of the required funding has now been secured.